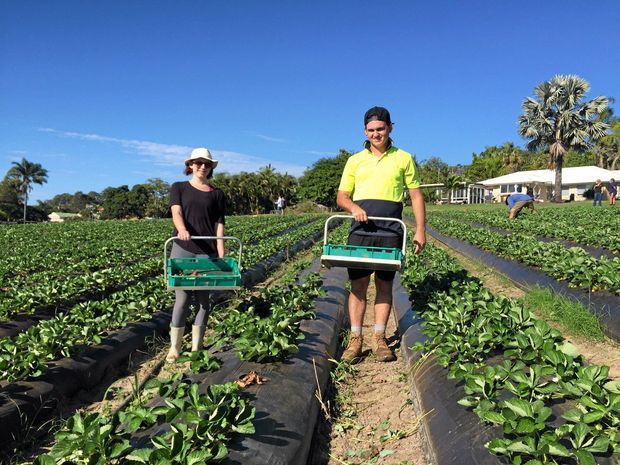 Wanted: Local workers – not backpackers – to pick strawberries and work in the Sunshine Coast’s strawberry industry.

Preference: People who live in south-east Queensland over our visiting backpackers.

On offer: 6000 to 8000 jobs as packers and pickers between May and September.

Future prospects: “The Sweetest Job of All”. Details from www.thesweetestjob.com.au.

Local growers argue it is “proactive” and cheaper to employ the same workers for strawberry picking year after year, rather than train new overseas workers season after season.

However they are mostly worried the proposed backpacker tax – which has been delayed for six months by the federal government – will stop large numbers of backpackers working on their farms.

Opposition Leader Bill Shorten was questioned over Labor’s position on the proposed backbacker tax on Thursday morning, but did not specifically say Labor would withdraw the proposed tax.

“If we were elected we would sit down with the farmers, with the tourism operators. We have said this is one of the worst-designed taxes we’ve ever seen,” Mr Shorten said.

“Anecdotally, there was some evidence that backpacker numbers were already affected,” Mr Schultz said.

“Our area alone (at Wamuran) handles up to 7000 backpackers coming through, so we rely on them a great deal and it has a lot of people worried.”

The government plans to close a concession allowing backpackers as “non-residents” to claim the wages they earn on Australian farms tax-free. They would instead pay 32.5 cents on each dollar earned.

“It was only about 10 years ago that the workforce on our farm was almost all local,” Ms Davey said.

“These days, over 80 per cent of our workers are from overseas.

“As much as we value our foreign work force, who have played a pivotal role in growing this industry to the size it is today, we would love to see a significant increase in local workers who are willing to become a part of our farming family and return each year for strawberry season.”

Around 80 per cent of south-east Queensland’s strawberries are grown on the Sunshine Coast and in the Moreton Bay region.

Queensland Strawberry Growers Association, Growcom and the Food and Agricultural Network partnered with the two local councils to drive a local jobs campaign linked to strawberries.

She says growers genuinely believe the backpacker tax “will have a devastating impact” on their industry.

“If the backpacker tax comes in that level – at 32.5 per cent – the backpackers and the working visa holidaymakers have told us that they will not come here,” she said.

“Why work in this industry if we are not going to make any money?”

She said growers wanted stable, local workforce “as a base”, because it would save them money because they would not have to retain successive waves of overseas backpackers.

“The aim of this is to gain a returning workforce of local employees, rather than a backpacker ‘one season only’ workforce, reduce re-training costs and drive job creation within the local economy.”

President of the Queensland Strawberry Growers Association Luigi Coco agreed growers were concerned at changes which could make it harder to attract backpackers.

“Getting temporary workers to pick strawberries can often be difficult,” he said.

“This campaign offers our growers the chance to build themselves a stable workforce of local residents. “